The Dwarf Fortress 10,000 Year Project is all about generating worlds with a long and detailed history.

Dwarf Fortress is a single-player fantasy game. You can control a dwarven outpost or an adventurer in a randomly generated, persistent world.

The first thing you need to do before you can actually play the game is to generate said random, persistent world. This step is highly detailed compared to your average randomly generated world, moving through several stages that build upon one another to create a world with a depth that rivals some of the most obsessively hand written works of fiction. Particular attention is paid to the inhabitants of the world, simulating their lives as they move around the world, fight great mythical beasts, steal valuable treasures, settle down and have a family, and ultimately die leaving a mark of some kind upon the world's history.

Once the world has been created, you don't even have to play! You could instead choose to simply explore this vast archive of historical data, following the lives of notable persons, perusing the lists of unworthy adventurers slaughtered by a particularly dangerous beast, or charting the rise and fall of civilisations.

Dwarf Fortress allows you to tweak many parameters controlling how the world is generated. One of the most time consuming tweaks you can make is to increase the End Year, such that the world will continue playing out historical events for longer. This means that more people are born, live out their lives, and ultimately die, increasing the number of events exponentially.

The basic world generator enables you to generate worlds with up to 1,050 years of history. My aim here is to generate worlds with the maximum histories the advanced world generator will allow, 10,000 years, and to make those worlds available for anyone to play with. Then you can enjoy a world with ten millenia of backstory without having to wait a week (or maybe more) just to start playing! 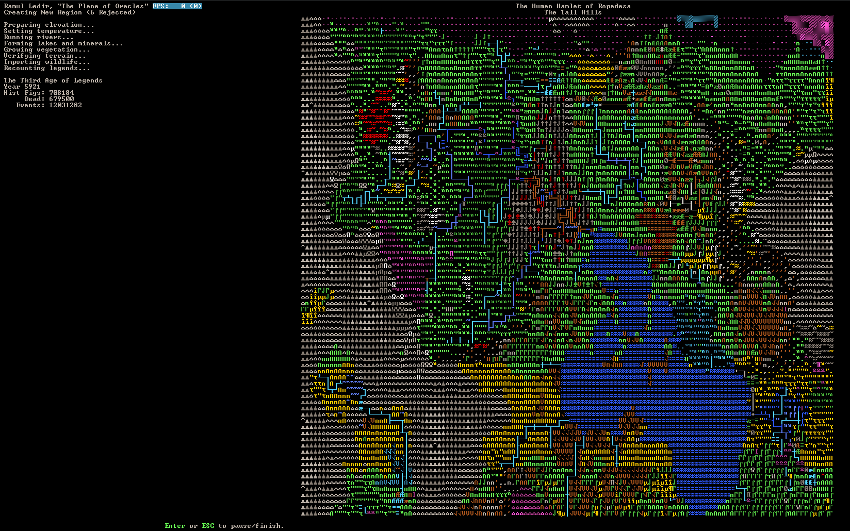